A New Approach to Upcycling

Anew is about taking food that would end up in the trash and creating new products.

“We reach people who are part of the food system, who are creating food on a daily basis, and involve them in this idea of how we can reduce food waste,” said Audra Stevenson, VP of Strategy and Growth and Interim CEO at Leftovers.

In William McDonough and Michael Braungart’s book, The Upcycle, they defined the goal of upcycling as promoting “a delightfully diverse, safe, healthy, and just world with clean air, water, soil, and power—economically, equitably, ecologically, and elegantly enjoyed.” This ideology, in an urban sense, is a cornerstone of community mobilization and interaction – which is at the heart of what Leftovers and the Anew program are accomplishing through upcycling.

“Fundamentally, to be effective at reducing food waste, we can’t do that as an organization of just 15 people,” Audra Stevenson said, “we need to mobilize the community around us to get people to think about food waste all the time.”

Audra has a BFA in Theatre and grew up in love with how the theatre brought people together; “You’re always starting with a mishmash of resources,” Audra said, “people, scenery and costumes…it’s really about a team of people coming together and creating something new.”

This method of collaboration is reflective of how Anew has approached creativity. At Leftovers, it isn’t up to the founder, Lourdes Juan, to dictate how donated food is upcycled; rather, the team works with local artisans by supplying them with food, that would have otherwise ended up in a landfill, and gives them the opportunity to pursue their creative spirit.

“It’s what I like so much about upcycling,” Audra said, “we reach out to a whole community of people and [ask if] anyone has an interesting idea of what we could do.”

Audra said that Lourdes was inspired to create Anew after discovering that not all food was suitable for local service agencies. Organic Sourdough bread, from Sidewalk Citizen Bakery, was harmful for people who didn’t have access to consistent dental care – which meant that a service agency like The Mustard Seed might not have had a choice in whether or not the bread ended up in a landfill after all.

A portion of the proceeds from all Anew creations are donated back to Leftovers.

“We realized the potential in these upcycling projects to have their own kind of brand,” Audra said, “its own place in the world, separate from the food rescue, [that would] empower more people in the community to rescue food in unique ways.”

The success of these creations has led Anew to several more local, small-batch creators throughout Calgary and Edmonton, including: Ollia Macarons & Tea, a Calgary-based French bakery; Sweet Relief Pastries, a Calgary-based patisserie; and Hello Mochi, an Edmonton-based market bakery, and more. 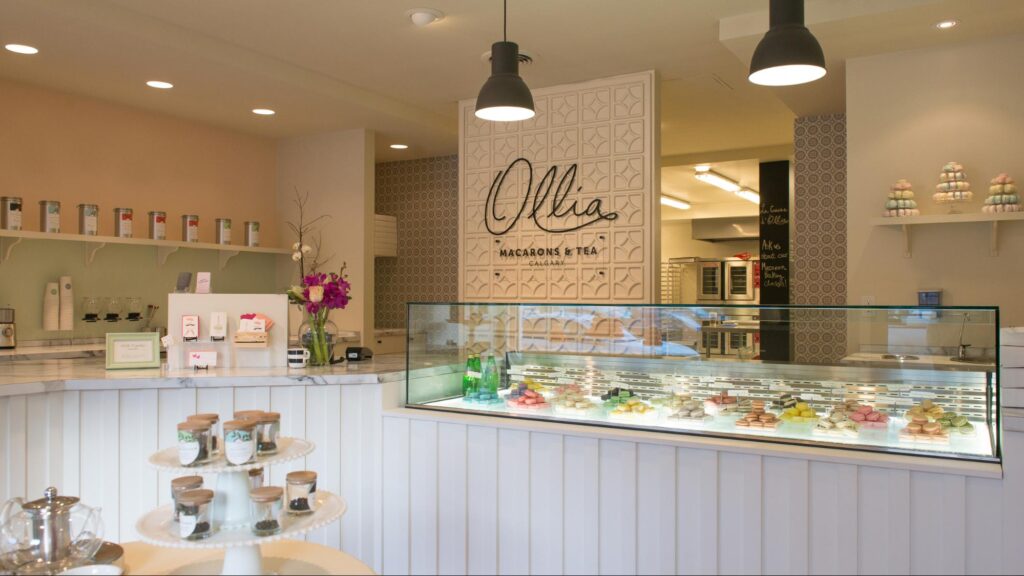 Lindsay Rousseau, the owner of Ollia, shares Anew’s mobilization-based values. “It’s participatory – It’s not just writing a cheque,” Lindsay said, “it engages our team to think about creative ways that we can repurpose this food into something else.” Lindsay took inspiration from her grandmother Shirley, one of the original volunteers with The Calgary Food Bank in the ‘80s, with her approach to food security.

“Because we’re in the food industry, I think it’s really important, “Lindsay said, “It makes sense that that’s where a lot of our time goes.”

Ollia, an inviting, open-concept bakery, is a signature fuchsia pink. Marble countertops and pastel colours are a warm welcome for local Calgarians who can see right through Ollia’s kitchen. “It was important for us that our kitchen team wasn’t locked behind a door,” Lindsay said, “so the way we designed it – the kitchen [team] can see out and people can see the kitchen…that was a very conscientious design feature.”

Ollia started collaborating with Anew about five months ago, when they made their first product: a chocolate-cookie sandwich with repurposed toffee from Sweetsmith Candy Co.

Anew received a large shipment of pretzels from WestJet, which Ollia used to dip in white chocolate and donate to Brown Bagging for Calgary’s Kids. The charity is close to Lindsay’s heart because the program provides over 5000 lunches every-single-day to children in Calgary. “If you don’t have access to food,” Lindsay said, “it’s hard to perpetuate the value that everyone should have access to an equal education.” 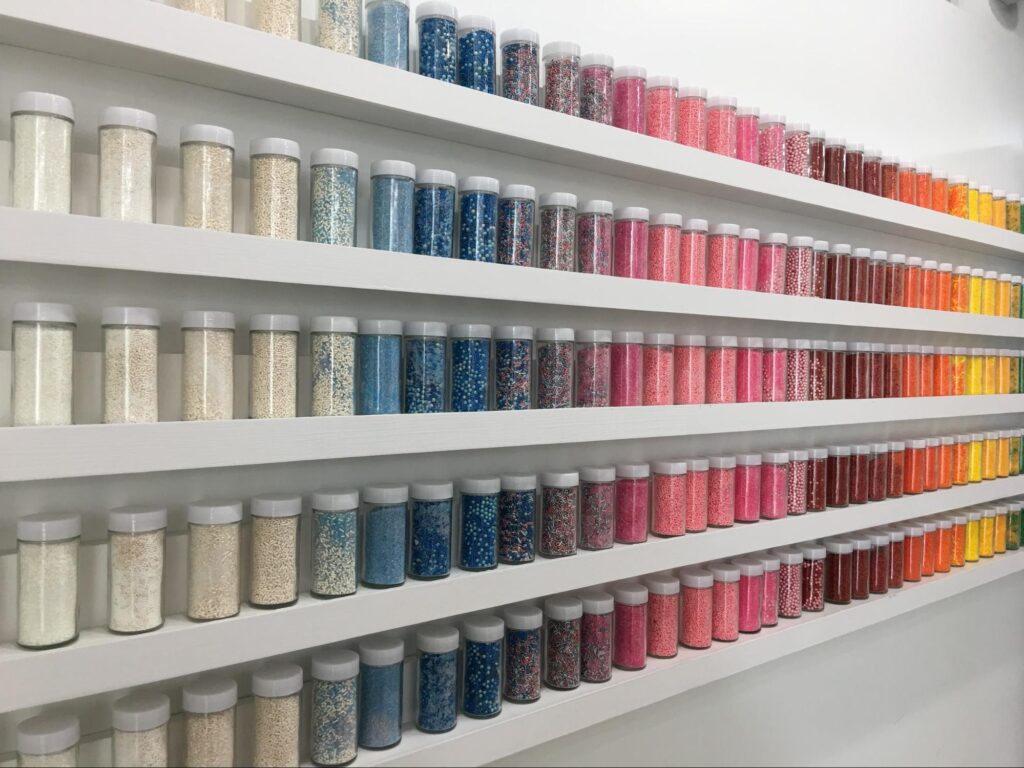 Deidre Lotecki, the pastry chef and owner of Sweet Relief Pastries, has been concerned about food waste since she opened her patisserie. “When we first opened, we were looking for ways to donate our leftovers,” Lotecki said, “when you first open, you have no idea how much to produce because you don’t know if anyone is going to come into the shop.” Deidre found Leftovers, and Anew, through her mother – who had passed along an article to Deidre about the work Leftovers was accomplishing.

“[Leftovers is] easy to work with,” Deidre said, “now they pick up food every week and bring it to the people who really need it – which is amazing.”

Sweet Relief Pastries is an eclectic, vibrant bakery in Victoria Park. The storefront is brimming with porcelain-white cabinetry, accented by a navy-blue wall with pink flowers, and the store’s signature “sprinkle wall” – a collection of every type of sprinkle you could think of; methodically placed to resemble the colours of the rainbow.

Deidre worked with Anew, on Canada Day this year, to create a rhubarb cake (by the slice) filled with rhubarb compote.  “Our community is everything,” Deidre said, “without them, we wouldn’t be here.” 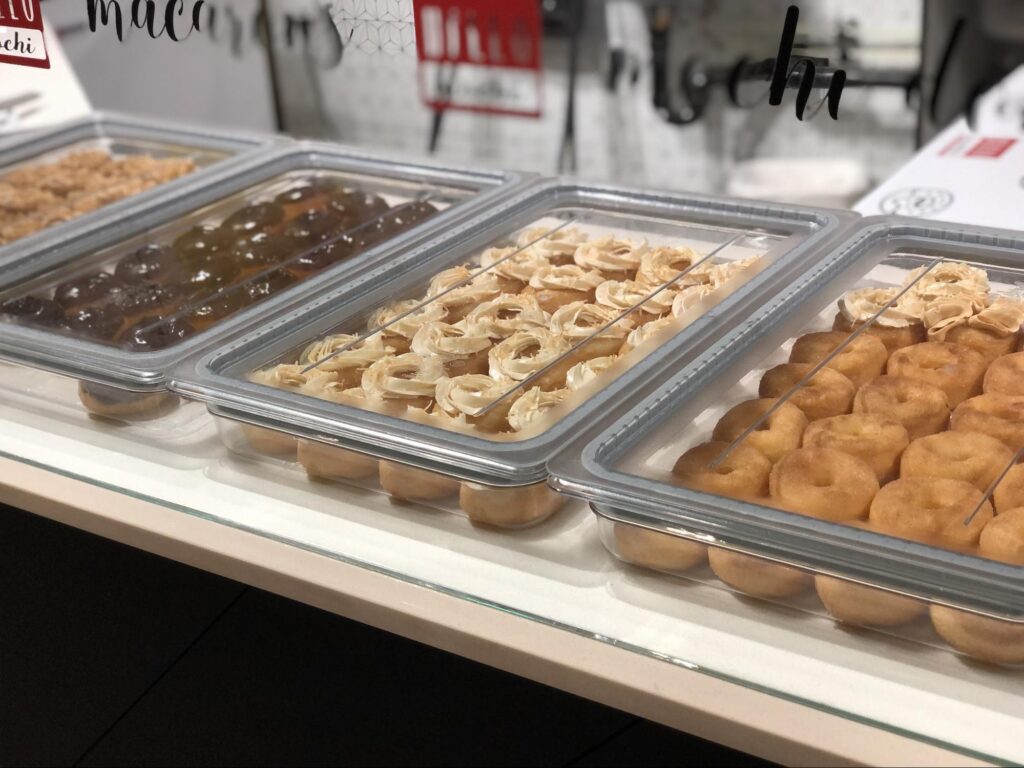 Sheryl Yu, the baker and owner of Hello Mochi, started her market-based bakery because she wanted to share her hobby with people. “I didn’t know what I was going to make,” Sheryl said, “I just knew it should be something different.” Hello Mochi specializes in gluten-free, vegan, mochi based donuts, squares, and macarons.

Part of Sheryl’s business model was to have virtually no leftovers at the end of each day, but other vendors have told her she’s leaving money on the table. “We sold out every time we came to market,” Sheryl said, “vendors come up to me and say you should just make more than you can sell and throw the rest out…but that’s my heart, it’s what I make, and it doesn’t make sense to me.”

Hello Mochi is located at the Bountiful Farmers Market in South Edmonton. The booth is adorned in its signature red-and-white logo and invites people to buy their “gluten-friendly, no-artificial-flavours, real-ingredients, and made-fresh-daily” creations.

Sheryl worked with Anew to create chocolate, mochi donuts, topped with caramelized pretzels, to coincide with our Anew launch, at the Bountiful Farmers Market.

“Who would have thought that a pretzel you eat in an airplane could end up in a delicious cookie?” Audra said, “these amazing, creative artisans are creating something that I would have never even guessed…it’s just such a cool collaboration and it makes our community larger, stronger and more engaged.” 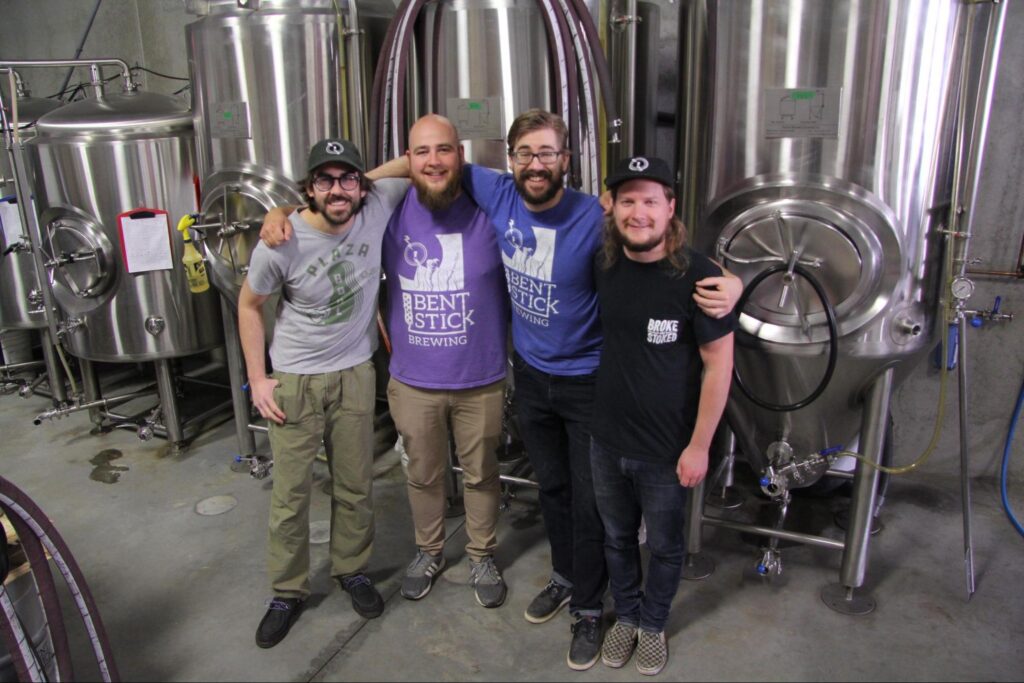 Ben Rix is a brewer and the co-owner of Bent Stick Brewing, an Edmonton based nano-brewery that’s mashing and boiling unique brews like salted citrus pale ales and mixed fermentation saisons. “We’ve been out here for four years now and we’ve made a lot of friends,” Ben said, “meeting people and building a little community around our taproom…we’re the only [brewery] on Fort Road and people are excited that we’re here.”

Ben is working with Anew to brew a traditional Eastern European fermentation called a Kvass – a low alcohol, sessional beverage, brewed with donated bread rolls from Anew, that he calls “Roll Together.” “It’s an idea we’ve had for a while,” Ben said, “traditionally, the brewery was next to a bakery, and it was a fun, cooperative effort.”

Bent Stick Brewing is a community-oriented, 1,700 sq. ft. brewery located in the Kennedale industrial park. It’s about “the local feel-goods,” Ben said, “people like supporting businesses that support our local community…we’re just four people from Edmonton and we see the positive effects from charities.

“Working with charities when you’re a business and you’re doing alright – it’s a no-brainer to give back to the community that’s supporting you.” Sophia Tang is the founder and CEO of coRISE, an upcycling organization based in Calgary that supports sustainable food systems, pet companionship programs, and mental health programs.

“Growing up as an immigrant in Canada…food waste was never an option for us,” Sophia said, “I’m dedicated to food upcycling because there is so much waste out there.”

CoRISE just celebrated their first birthday and have been collaborating with Anew since April. Sophia took near-end-of-life, beefsteak tomatoes from Anew and has sun-dried them to create healthy, snack-worthy crackers.

“I remember my grandpa telling me that you have to be compassionate and grateful for the food you have on your table,” Sophia said, “a single grain of rice took somebody effort, time, and backbreaking labour to grow…so never take it for granted.”

The sun-dried tomato crackers and cookies are available at Blush Lane Organic Market in Edmonton and Calgary. 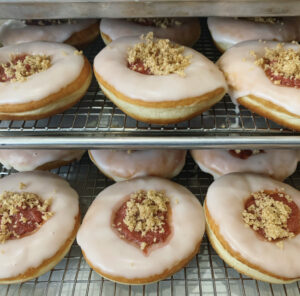 Hoopla Donuts, the venerable Calgarian destination for all-things donuts and coffee, teamed up with Anew back in June to create one of our first products – rhubarb crumble donuts. Hoopla Donuts, owned by coffee aficionados Phil & Sebastian, along with head chef Leslie Morrow, used donated rhubarb from our Home Harvest program for their upcycled donut creation. Charitable locals around Calgary scoured their backyards for the Canadian staple and accomplished a physically-distanced collaboration with Hoopla for their creative donuts. Hoopla and Anew will be partnering up again soon to work on a new donut with fresh, local apples.

There are Hoopla locations inside Phil & Sebastian cafes in Calgary Place, Marda Loop, the Chinook Centre, Manchester and Mission.

Follow Anew on Instagram, Facebook and Twitter to see the wonderful creations made for our communities through Anew. Are you a local food and drink artisan? You and your business can get involved in helping us create a more sustainable world by becoming an Anew member. It’s all about local ingredients, local charity, marketable products — it’s Anew approach to upcycling.

Your commitment to reducing food waste and increasing food access in our community is so incredibly valued – THANK YOU!

Due to COVID-19, many businesses are temporarily shutting their doors and cancelling events. As a result, we have seen a significant change in the frequency and volume of donations. At the same time, access to food has never been more difficult for many members of our community. Whether it’s students who have been isolated from their only meals of the day, seniors who are at-risk every time they leave home, or the many who have recently lost their jobs due to this crisis, we are seeing an unprecedented need for access to food.

We are posting changes/cancellations to food donation routes on the app as they come in. All routes that are posted on the app are as up-to-date as possible. If a donor or agency tells you they’d like to cancel or change hours, please email this feedback to heidi@rescuefood.ca (Calgary), garnet@rescuefood.ca (Edmonton) or brandy@rescuefood.ca (Winnipeg) so we can update the app.

If you have any questions at all, please email us at help@rescuefood.ca. Thank you so much for your help and willingness to be there for our community!